HOUSTON, May 15, 2017 –  LyondellBasell (NYSE: LYB), one of the world's largest plastics, chemicals and refining companies, has broken ground on the first commercial Hyperzone polyethylene (PE) plant at its La Porte, Texas, complex. The plant will be capable of producing 1.1 billion pounds (500,000 metric tons) of high density polyethylene (HDPE) annually and will employ LyondellBasell’s new proprietary Hyperzone PE process technology that provides enhanced material performance. Startup of the plant is planned for 2019. 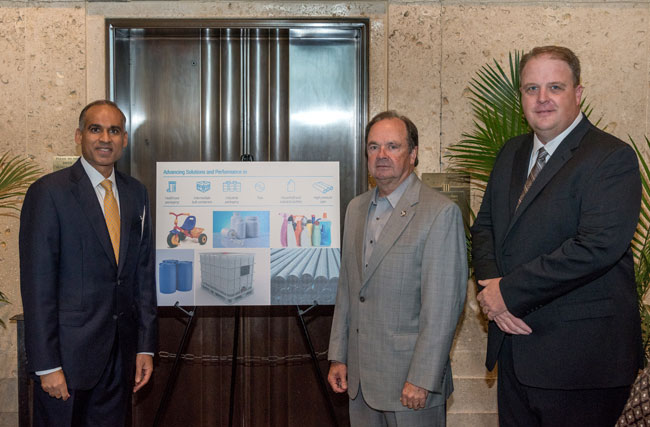 “Today represents the launch of our latest innovation in plastics technology,” said Bob Patel, LyondellBasell CEO. “The construction of the Hyperzone PE plant will not only provide jobs and revenue for the local community, it will produce a better plastic that advances solutions to modern challenges, like contributing to the purity of water supplies through stronger and more versatile pipes and ensuring the freshness of bulk foods by providing tough, crack-resistant containers for storage. This is truly a global effort developed by an international team, and built to serve worldwide markets.”

LyondellBasell is a global leader in the development and licensing of polyolefin processes and plans to make the Hyperzone PE technology available for licensing in the future. The technology took years to advance to commercialization and was a product of LyondellBasell’s global research and development teams in Ferrara, Italy; Frankfurt, Germany; Cincinnati, Ohio; and Houston, Texas.

The company chose to build the new plant at its existing La Porte Complex because of its proximity to price-advantaged U.S. feedstocks and the transportation infrastructure needed to ship product to markets across the globe. The project will create up to 1,000 jobs at the peak of construction and 75 permanent positions. As modeled by Impact Data Source, the approximately $700 million project is expected to generate more than $67 million in tax benefits for the state, county, school district, community college and other local taxing districts over a 10-year period following construction.

“LyondellBasell is a great partner to our community and provides a tremendous benefit to the local economy. This Hyperzone project is a testament to that and a prime example of the growth of the chemical industry in Texas and the Houston region,” said U.S. Representative Brian Babin. “These are good paying jobs for our friends and neighbors right here in La Porte. I am very grateful for LyondellBasell’s investment in our area and the significant contributions that the company and its employees bring to our local communities.”

The La Porte Complex is one of LyondellBasell’s largest manufacturing facilities spanning approximately 550 acres. The complex has two docks on the Houston Ship Channel and truck and rail transportation capabilities. Once the Hyperzone PE plant is complete, the La Porte Complex will more than double its annual PE capacity to 2 billion pounds (900,000 metric tons). LyondellBasell currently produces a total of 7 billion pounds (3 million metric tons) of HDPE annually, including its share of capacity through joint venture facilities. The company is a leading worldwide producer of all forms of PE with an annual capacity of 12 billion pounds (5 million metric tons).

“The benefits of this project will extend well beyond our site’s boundaries through its ongoing economic impact to the local area,” said Christopher Cain, site manager for LyondellBasell’s La Porte Complex. “Additionally, our employees have deep roots in this community and invest thousands of hours volunteering with local organizations. We are pleased to continue our investment in La Porte.”

The Hyperzone PE plant is part of LyondellBasell’s plan for $3-5 billion of investments along the U.S. Gulf Coast. The company recently completed work on ethylene expansion projects at its La Porte, Channelview and Corpus Christi sites in Texas.  Additionally, development of a world-scale propylene oxide and tertiary butyl alcohol (PO/TBA) plant at the company’s Channelview site is progressing and a final PO/TBA investment decision is expected in the second half of 2017.