LyondellBasell is committed to Advancing Our Planet by cleaning beaches, preserving ecosystems and treating injured marine mammals. Employees from around the world have been engaged in delivering on that commitment through volunteer work aimed at reducing environmental impacts.

Since the beginning of 2021, LyondellBasell employee volunteers and their friends and families have dedicated over 400 hours to cleaning neighborhoods, parks and beaches around the Greater Houston area. Through the power of many, Houston-area LyondellBasell volunteers have successfully collected approximately 3,000 pounds, or 1.5 tons, of trash through recent activities like the Texas Conservation Fund’s annual River, Lakes, Bays ‘N Bayous Trash Bash® (Trash Bash) and the Texas General Land Office’s Adopt-A-Beach.

“My family and I most recently participated in Adopt-A-Beach,” said Amy Caldwell, LyondellBasell site manager, Victoria, Texas plant. “Not only did we do our part to help the environment, but we had a great time doing it. I’m proud to work for a company that is focused on making a difference for generations to come.”

During both Trash Bash and Adopt-A-Beach, volunteers pick up trash that can include aluminum cans, plastic caps and lids. The efforts by volunteers in keeping local beaches and waterways clean make a big impact on resources that connect us all.

“Our backyards are part of the Galveston Bay watershed, and we are all more connected than one would think,” said Lori Traweek, president of the Texas Conservation Fund. “We are thrilled to see companies like LyondellBasell be good environmental stewards and participate in our Clean It Like You Mean It!® efforts. We are so grateful for our long-standing community partnership.”

In the United Kingdom, LyondellBasell recently joined Thames21 and Mersey Rivers on the Plastic Free Mersey Project launch. By collecting data on plastic litter around the Mersey catchment, the project will tackle how society uses and disposes of plastic. It will shape behavior change to keep litter out of waterways, thereby reducing its impact on the natural environment. During the launch event, volunteers, including LyondellBasell employees, gathered on the banks of the River Mersey to sort, count and quantify plastic waste in the waterways flowing from the Pennines mountains to Liverpool Bay, U.K.

LyondellBasell employees have also participated in other efforts to help preserve our ecosystem, including releasing back two green sea turtles with the Houston Zoo Sea Turtle Hospital keepers. The keepers rescued 37 endangered green sea turtles along the Texas coast near East Matagorda Bay and Galveston Bay during the unprecedented freezing conditions from Winter Storm Uri in February. Combined with other sea turtles found along the Texas coast, from Galveston to South Padre Island, the rescue during Winter Storm Uri is being reported as the largest recorded cold-stunning event for sea turtles in Texas history.

LyondellBasell remains committed to Advancing Our Planet along with company volunteers who put real action behind this commitment every day, making meaningful progress toward addressing some of the world’s most pressing challenges. 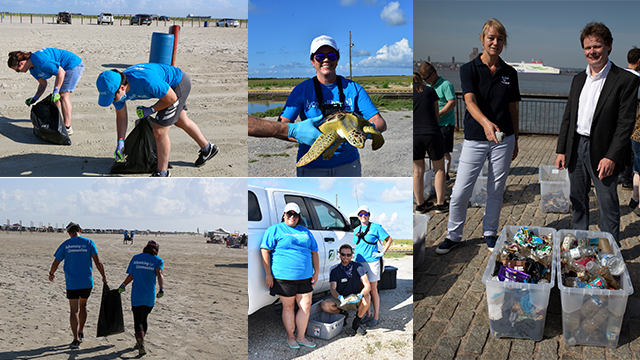