HOUSTON and LONDON, Aug. 22, 2018 /PRNewswire/ -- LyondellBasell (NYSE: LYB), one of the world's largest plastics, chemicals and refining companies, today officially broke ground on what will be the largest propylene oxide (PO) and tertiary butyl alcohol (TBA) plant ever built. 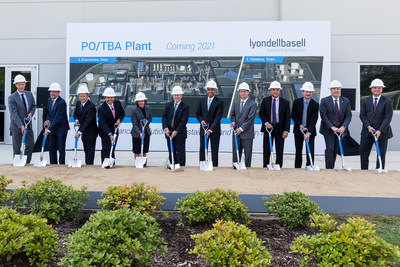 "Today's groundbreaking is a historic moment for our company," said Bob Patel, CEO of LyondellBasell. "This plant will be the largest of its kind, built to meet the rising global demand for urethanes used by billions of consumers each day and clean-burning oxyfuels that will help improve air quality around the world. The construction of this project will provide jobs for our neighbors, support local businesses and strengthen our communities with increased tax revenues across the greater Houston region. As one of the cornerstones of our global growth strategy, the new plant will strengthen our ties in Houston and generate long-term value for our shareholders."

To optimize product balances and realize synergies between LyondellBasell sites, two facilities will be constructed on existing manufacturing sites. The 140-acre PO/TBA plant will be built at the LyondellBasell Channelview Complex located in Channelview, Texas while an associated 34-acre ethers unit, which will convert TBA to oxyfuels, will be built at the company's Bayport Complex in Pasadena, Texas.

The company chose to build the new plant at these existing locations along the Texas Gulf Coast because of their proximity to low-cost feedstocks and the transportation infrastructure needed to ship products to markets around the globe.

"The groundbreaking on this new project not only brings more job opportunities for Texans, it also adds to the growing diversity of our booming economy," said Texas Gov. Greg Abbott. "It is because of investments from companies like LyondellBasell that the Texas economy continues to be the envy of the nation. I thank LyondellBasell for their investment and wish them continued success."

"As the Congressman representing the largest petrochemical and refining complex in North America, I welcome the news about the construction of these new PO/TBA facilities at LyondellBasell's Channelview and Bayport plants. These $2.4 billion facilities are not only an expansion of LyondellBasell, but an investment in the future of our communities along the Texas Gulf Coast," said U.S. Rep. Brian Babin (TX-36). "The several billion pounds of PO and TBA products that will be produced will make the way for more local jobs, economic growth and regional expansion over the coming decade and beyond."

The project will create more than 2,200 construction jobs at the peak of construction and 160 permanent positions.

"We value our relationships with industry and are pleased LyondellBasell has chosen to continue to invest in our region with this project, which will bring tremendous benefit to our local economy and workforce," said Harris County Judge Ed Emmett. "The construction of this world-scale facility in Harris County is a testament to LyondellBasell's commitment to this area and further solidifies our position as a global petrochemical and manufacturing hub."

Global demand for urethanes is projected to grow by 4 to 5 percent over the next five years due to emerging economies in Asia and India and their increased demand for consumer products. The global TBA market is expected to increase by 3 percent annually between 2018 and 2028, as drivers and governments in Asia Pacific and Latin America seek to improve air quality with cleaner-burning gasoline.

LyondellBasell plans to sell the PO and derivative products to both domestic and global customers, while the oxyfuels will be primarily sold into Latin America and Asia. A portion of the TBA will remain in the domestic market in the form of high purity isobutylene which is used in tires and lubricants. The majority of the products will be exported via the Houston Ship Channel.

About LyondellBasell
LyondellBasell (NYSE: LYB) is one of the largest plastics, chemicals and refining companies in the world. Driven by its employees around the globe, LyondellBasell produces materials and products that are key to advancing solutions to modern challenges like enhancing food safety through lightweight and flexible packaging, protecting the purity of water supplies through stronger and more versatile pipes, improving the safety, comfort and fuel efficiency of many of the cars and trucks on the road, and ensuring the safe and effective functionality in electronics and appliances. LyondellBasell sells products into more than 100 countries and is the world's largest producer of polypropylene compounds and the largest licensor of polyolefin technologies. In 2018, LyondellBasell was named to Fortune magazine's list of the "World's Most Admired Companies." More information about LyondellBasell can be found at www.LyondellBasell.com. 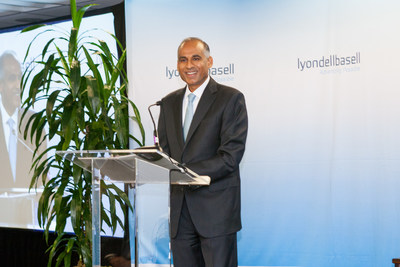