A group of LyondellBasell employees were recognized for their bravery and awarded the CEO Lifesaver Award during a recent ceremony. The CEO Lifesaver Award is a top company award given to employees and contractors who take heroic measures to save another individual’s life. Luke Halterman, a Health and Safety specialist at LyondellBasell’s Morris, Illinois plant, used CPR to save the life of a stranger. Halterman was on his honeymoon in St. Lucia when he leapt into action after a man went into cardiac arrest and nearly drowned.

“I was actually scheduled to be snorkeling at the time, but couldn’t get a good seal on my snorkel,” said Halterman. “My wife and I decided to head back to the beach and that is when I saw a kayak pulling a man, who was face down in the water.”

Halterman used his emergency medical technician (EMT) training to perform chest compressions. He credits his on-the-job opportunities at LyondellBasell, which included EMT courses, with providing him the skills needed to save the man’s life.

“After about 10 to 15 minutes, my arms started to lock up from the compressions, but miraculously, [the person] began responding and was taken to the hospital via ambulance,” said Halterman.

Mike VanDerSnick, LyondellBasell senior vice president, Americas Manufacturing, said Luke truly is a lifesaver and he is proud to have Luke on Team LYB.

“Luke’s rapid response demonstrates the strength of his character and willingness to step up to help those in need,” said VanDerSnick.

At LyondellBasell’s Channelview Complex, Carlos Gutierrez, David Cruz, James Hendricks, Manual Reyes, Stephen Ayers, Matt Svoboda and Marcus Seurattan stepped in in to save their colleague’s life after the colleague was found unresponsive. Gutierrez had noticed the colleague was not in the fieldhouse nor responding on the radio, leading him to investigate. Gutierrez eventually found his colleague unresponsive in a vehicle and quickly began CPR while six other co-workers, also EMT-trained, mobilized from across the site to help render aid.

The seven of them took turns performing CPR until Life Flight arrived and safely transported their co-worker to receive further care at a local hospital. While the group provided medical attention, their other teammates helped ensure the units continued to run safely and  the shift superintendent, Lance Barnett, assisted as the on-scene commander.

Performing life-saving actions without hesitation, these employees truly embody the high-quality people culture, training, and commitment to community. In both situations, the employees’ astute thinking and ability to dive into life-threatening situations yielded the greatest outcome. Across the globe, LyondellBasell employees are immensely proud and honored to celebrate their brave teammates who have been credited as real-life heroes. 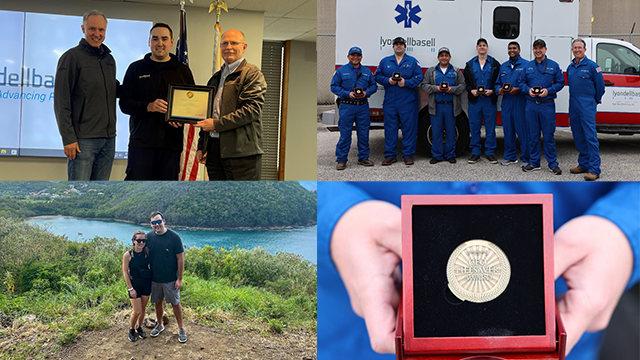