HOUSTON, May 3, 2017 /PRNewswire/ -- LyondellBasell (NYSE: LYB), one of the world's largest plastics, chemicals and refining companies, today announced a $1.7 million donation to the United Way of Greater Houston for its 2016 campaign. As part of the company's commitment to being a responsible, good neighbor, LyondellBasell employees held United Way campaigns at 23 company sites across the United States and raised a total of $2.65 million. 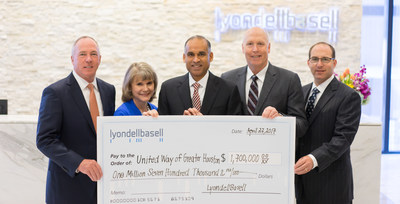 "United Way mobilizes the caring power of communities to advance the common good," said Bob Patel, LyondellBasell CEO. "LyondellBasell is proud to support the United Way and we are personally proud of our employees' generosity as we work to be a good neighbor in the communities where we operate."

The company's 2016 national campaign was led by Jeffrey Kaplan, LyondellBasell's executive vice president and chief legal counsel. Donations to the United Way of Greater Houston come from multiple LyondellBasell manufacturing sites, including the Channelview Complex, the Houston Refinery and the La Porte Complex, as well as the company's operational headquarter offices in downtown Houston.

"As a company we are deeply committed to United Way's mission of improving lives and changing communities," said Dan Coombs, LyondellBasell executive vice president of Global Manufacturing, Projects, Refining and Technology; and United Way of Greater Houston board member. "I am honored to be a member of the organization's board and play a leadership role in making that mission a reality in our communities."

"The generous support of LyondellBasell and its employees has helped United Way of Greater Houston improve millions of lives and create lasting change in key areas," said Anna M. Babin, president and CEO, United Way of Greater Houston. "From ensuring that our neighbors' basic needs are met to initiatives that help families achieve financial stability and self-sufficiency, our reach in the community is greater because of the support of companies like LyondellBasell."

LyondellBasell's global philanthropic efforts are focused in the areas of education, health, environment and providing support for first responders. Over the last three years, the company has supported more than 990 charities around the world, while more than 9,200 employees have donated approximately 40,000 volunteer hours to local community service projects. The company is an active supporter of many local Houston organizations, including Junior Achievement of Southeast Texas, the Houston Food Bank, Theater Under the Stars and the Astros Foundation. The company has also actively supported the Harris County Sheriff's Industrial Unit Deputies, the Houston Police Department and the Houston Fire Department through grants that have enabled the purchase of needed safety equipment and specialized training.

LyondellBasell (NYSE: LYB) is one of the world's largest plastics, chemicals and refining companies and a member of the S&P 500. LyondellBasell products and technologies are used to make items that improve the quality of life for people around the world including packaging, electronics, automotive parts, home furnishings, construction materials and biofuels. More information about LyondellBasell can be found at www.lyondellbasell.com.

About the United Way of Greater Houston

For more than 90 years, United Way of Greater Houston has been a leader and trusted partner in improving lives, tackling key community social issues and making a lasting difference.  United Way of Greater Houston, last year alone, touched the lives of more than 2.4 million of the neighbors in the Bay Area and in Fort Bend, Harris, Montgomery and Waller counties.  United Way focuses on strengthening the community by developing children and youth to their full potential, creating strong families and safe neighborhoods, sustaining senior independence and rebuilding people's lives in times of crisis. The United Way of Greater Houston is the best way to make the biggest difference in our community, changing Houston for good.  For more information, please visit, http://www.unitedwayhouston.org.