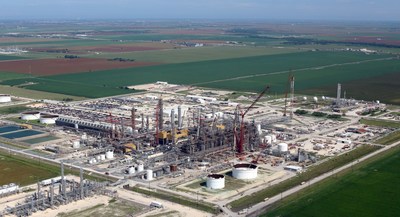 "As we look to meet growing, global demand for our products, we continue to seek the right opportunities that ensure we are well positioned for the longer term," said Bob Patel, LyondellBasell CEO and chairman of the management board. "By expanding ethylene capacity in the U.S. through debottlenecks rather than long and costly greenfield developments, we quickly added substantial capacity for significantly less than the cost of a new plant," he added.

Completion of the Corpus Christi expansion is another milestone in the company's organic profit-generating growth strategy. To date, the company has completed the following expansion projects at its manufacturing sites globally:

Since 2012, LyondellBasell has invested approximately $2 billion in U.S. Gulf Coast expansion projects and plans to invest an additional $3 billion in the region. In September, the company announced the construction of a high density polyethylene plant (HDPE) in La Porte that will be the first to utilize LyondellBasell's new proprietary Hyperzone PE technology. HDPE is one of the most versatile plastics because it is lightweight, yet very strong; impact resistant; weather resistant; it can be molded into almost any shape and is widely recyclable. Construction is scheduled to begin in early 2017 with start-up planned for 2019. Additionally, development of a world scale propylene oxide and tertiary butyl alcohol (PO/TBA) plant at the company's Channelview site is progressing.

Ethylene is a basic chemical building block used in consumer products such as housewares, construction materials, automotive parts, food packaging and personal care products. Global demand for ethylene has consistently grown at a 4 percent annual rate, according to IHS Markit.

About LyondellBasell
LyondellBasell (NYSE: LYB) is one of the world's largest plastics, chemical and refining companies and a member of the S&P 500. LyondellBasell products and technologies are used to make items that improve the quality of life for people around the world including packaging, electronics, automotive parts, home furnishings, construction materials and biofuels. More information about LyondellBasell can be found at www.lyb.com.

Forward-Looking Statements
This release includes forward-looking statements and projections, made in reliance on the safe harbor provisions of the Private Securities Litigation Reform Act of 1995. The company has made every reasonable effort to ensure that the information and assumptions on which these statements and projections are based are current, reasonable, and complete. Actual results could differ materially based on factors including, but not limited to, our ability to obtain all necessary regulatory approvals and to successfully construct and operate the proposed facilities described in this release; and general economic conditions in geographic regions or markets served by LyondellBasell or where operations of the company are located.  Additional factors that could cause results to differ materially from those described in the forward-looking statements can be found in the "Risk Factors" section of our Form 10-K for the year ended December 31, 2015, which can be found at www.lyb.com on the Investor Relations page and on the Securities and Exchange Commission's website at www.sec.gov. While the company makes these statements and projections in good faith, neither the company nor its management can guarantee that anticipated future results will be achieved. The company assumes no obligation to publicly update or revise any forward-looking statements made herein or any other forward-looking statements made by the company, whether as a result of new information, future events, or otherwise.