HOUSTON, May 23, 2018 /PRNewswire/ -- Jeffrey A. Kaplan, executive vice president and chief legal officer at LyondellBasell  (NYSE:LYB), one of the largest plastics, chemicals and refining companies in the world, has been named a "Legend in Law" winner at the 2018 Burton Awards for Legal Achievement. 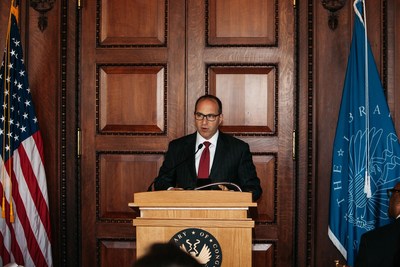 The "Legend in Law" awards are given to general counsels who demonstrate a lifetime of achievement, abide by high ethical standards and are respected by the broader legal community.

"Without a doubt, Jeff is one of the best in his field and exemplifies the highest standards for integrity, sound legal counsel and knowledge of the law," said Bob Patel, CEO of LyondellBasell. "Jeff is very deserving of this recognition."

The award was presented in Washington, D.C. in association with the Library of Congress and sponsored by the American Bar Association and industry publication Law360.

Kaplan joined LyondellBasell in December 2009 and has served as the company's executive vice president and chief legal officer since May 2015. In this role, he is also responsible for the company's public affairs function. Previously, he served in a variety of leadership roles at Chevron Phillips Chemical Company and was in private law practice in Houston, Texas. Kaplan earned a Bachelor of Science from Amherst College and a Juris Doctor from the University of Texas School of Law.

About LyondellBasell
LyondellBasell (NYSE: LYB) is one of the largest plastics, chemicals and refining companies in the world. Driven by its 13,400 employees around the globe, LyondellBasell produces materials and products that are key to advancing solutions to modern challenges like enhancing food safety through lightweight and flexible packaging, protecting the purity of water supplies through stronger and more versatile pipes, and improving the safety, comfort and fuel efficiency of many of the cars and trucks on the road. LyondellBasell sells products into approximately 100 countries and is the world's largest licensor of polyolefin technologies. In 2018, LyondellBasell was named to Fortune magazine's list of the "World's Most Admired Companies." More information about LyondellBasell can be found at www.lyondellbasell.com.